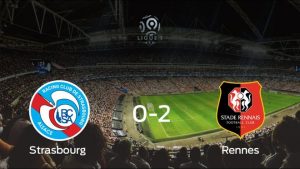 Rennes won 2-0 at Strasbourg as visitors during Saturday’s match at the Stade de la Meinau. Strasbourg faced the match with a desire to overcome their league score after losing the last game against Dijon FCO by a score of 2-1. In the side of the visitors, the Rennes reaped a tie at 1 goal against Guingamp, adding a point in the last game of the competition and accumulated 3 draws in a row in the competition. Thanks to this result today, Rennes reaches the Strasbourg achieving the tenth position at the end of the match.

The first team to score was the visiting team, who put themselves ahead thanks to the goal of Bourigeaud in the minute 24, ending the first part with a 0-1 on the score.

After the break of the first half came the goal for the whole Rennais, who distanced itself in the score thanks to a Hunou goal, thus closing the game with a final score of 0-2.

During the match, both coaches exhausted all their changes. On the part of the Strasbourg came from the bench Mothiba, Zohi and Corgnet to replace Thomasson, Gonçalves and Nuno Da Costa, while changes by Rennes were Lea Siliki, Gelin and Hunou, who entered by Bourigeaud, Johansson and Camavinga.

The referee cautioned Caci with a yellow card from the local team and Camavinga and Koubek from the Rennais team.

After concluding the match and adding three points at home Rennes ranks tenth with 49 points, while the team led by T. Laurey is in twelfth place with 46 points.

The next day the Strasbourg team will play away from home against Nantes, while Rennes will face Lille at home.