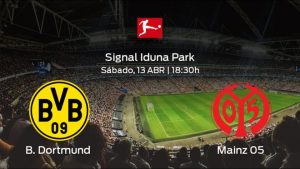 The match between the second and the twelfth comes.
Next Saturday at Signal Iduna Park at 6:30 pm, Borussia Dortmund and Mainz 05 will be measured at the twenty-ninth day of the Bundesliga.

Borussia Dortmund are looking forward to the match of the twenty-ninth day after losing the last match against Bayern München by a score of 5-0. Since the beginning of the league, the hosts have won in 19 of 28 matches played so far in the Bundesliga and have managed to fit 66 goals in favor and 35 against.

On the visitors’ side, Mainz 05 won 5-0 at OPEL ARENA in their last league match against SC Freiburg, with goals from Mateta, Boëtius and Onisiwo, so they look for victory again on their date. in the stadium of Borussia Dortmund. The balance in this year of the competition for the Mainz 05 is 9 wins in 28 games played with a balance of 33 goals in favor and 48 against.

With respect to the performance at home, Borussia Dortmund has won 12 times and has drawn twice in 14 games played so far, which is shown as a solid team in his fief, adding most of the points played. Outside the home, Mainz 05 has won 3 times, lost 9 times and drawn 2 times in 14 contested matches, so the Borussia Dortmund players would have everything in their favor to achieve a positive result.

In the past, there have been other confrontations in the Signal Iduna Park in which Borussia Dortmund has defeated Mainz 05 7 times, while this one has done so on 1 occasion. In addition, the other 4 remaining matches ended in a draw. The last match between Borussia Dortmund and Mainz 05 in the Bundesliga took place in November 2018 and ended with a 1-2 score in favor of Borussia Dortmund.

With regard to the situation of these teams in the Bundesliga, the locals are ahead of their rival with a difference of 30 points. The locals come to the game in second place and a total of 63 league points. For its part, the visiting team is twelfth with 33 points.